Bob Knight took a shot at John Calipari’s University of Kentucky basketball program over the weekend, and on Monday, UK shot back.

At a speech Saturday in Wabash, Ind., portions of which were uploaded to YouTube, Knight, the former Indiana University head coach, took a shot at Calipari’s 2009-10 UK team in answering an audience member’s question. 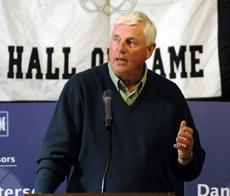 Bob Knight again took aim at John Calipari with comments during a speech about the Kentucky basketball program.
CAPTION
By Tom Strickland, AP

“Kentucky, year before last, started five players in the NCAA Tournament games that had not been to class that semester, Knight said during the video, from a speech he gave at the Honeywell Center. And that’s that one-and-done philosophy that we have now.” (Video of Knight’s comments below)